Took the afternoon to go out to Tomales Bay for a bit of paddling, sailing, and clean-up work.

I had intended to launch from Nick's Cove but it seemed pretty windy there, so I drove further down the bay to Marconi Cove where the wind was slightly less. I paddled to Marshall Boat works and then popped my Windpaddle Sail to head back into the bay along the eastern shore.

The wind was just right, enough to really make the boat go, but not at all technically demanding. Just a fun run down the bay. 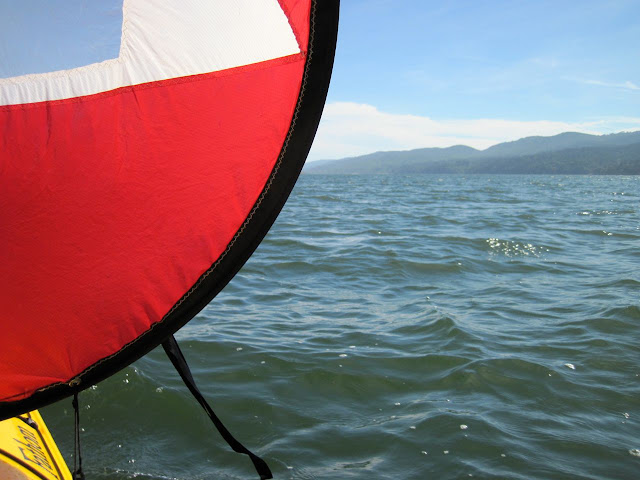 I continued a little bit south of Marconi and pulled out at a gravelly beach I had never before visited. There was a little patch of iceplant for me to sit on and it was out of the wind, so that is where I made my lunchspot. 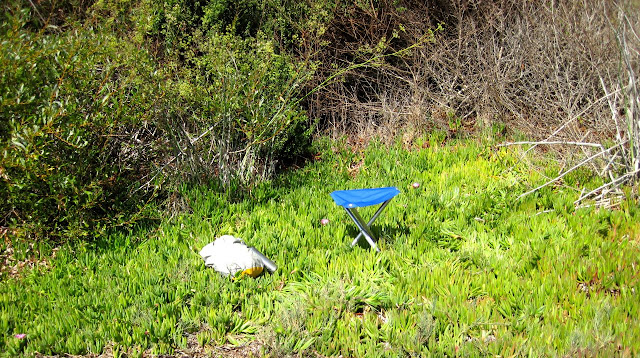 It was very pleasant there. I am glad to have found another little spot along the bay that I can visit and call my own. There was some evidence that others had visited this beach before I did: some empty aluminum Budweiser cans. I saw three of them.

But that got me to wonder....canned beer comes in SIXpacks....were there more than three cans on the beach? I began searching and soon found a fourth and then a fifth can. I looked hard for a sixth can but could not find one.

But that bugged me because I could not imagine anyone drinking five beers and then packing the sixth home with them. A thorough search turned up the last can.

I walked up and down the beach in search of other litter to pick up and, except for some jetsam from the oystering operations, I found very little. The plastic netting you see in the photo below was half buried in the beach gravel. It took a lot of pulling to free it from the beach so that I could remove it. 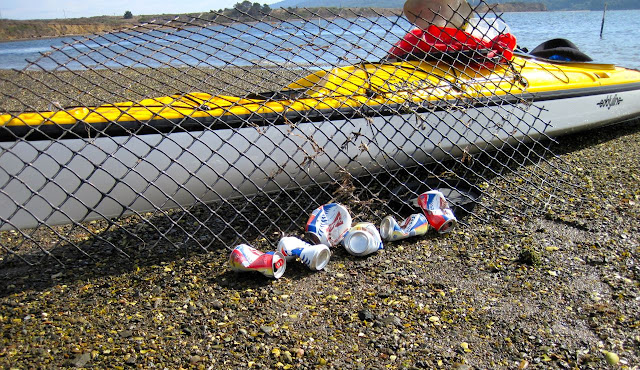 I rolled it up and tucked it under the deck bungees and headed home. 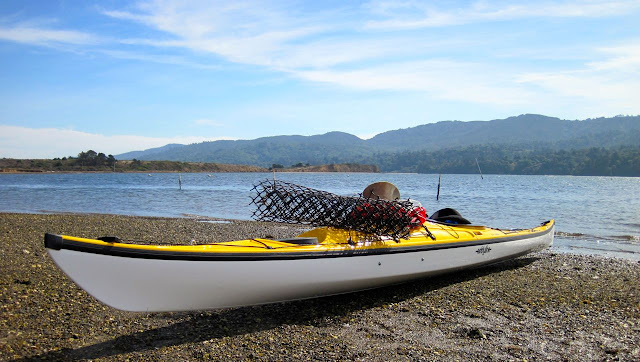 All that garbage is now in my trash and recycling bins to be collected next Monday.

Adding a little coastal cleanup to my paddling outings makes them even more of a pleasure for me.
Posted by Dan Gurney at 7:14 PM 2 comments: Links to this post

Once More to the Lake

I had some bills to pay and some house/garage work that kept me busy all morning long. By noon the morning fog burned off and I was eager to get out to Annadel Park again, this time not to hike but to ride Ted's mountain bike.

I rode from Lake Ralphine up to Spring Lake Park and from there up the Richardson Trail to Lake Ilsanjo. I was riding for about an hour and a half and covered about 12 miles in all—all of it a joy.

I'd never ridden a mountain bike with suspension before (where have I been all these years?) and I really enjoyed the smooth ride.


Here is a map of the ride:

After the ride I came home to get cleaned up to attend a board meeting regarding ukuleles in schools.
Posted by Dan Gurney at 10:34 PM 3 comments: Links to this post

My morning was spent at the car dealership getting my Subaru its 12-month service.

At nearly noon I was at Chaz's Hub Cyclery to have a drum brake installed on our tandem—something safety requires.

So by early afternoon I was eager to get out to Jenner to see the mouth of the Russian River which had opened on Sunday.

I paddled out to the mouth to see a great deal of bird activity. Most interesting were the 200 or so Brown Pelicans who were standing on both sides of the mouth of the river, apparently digesting their catches of the day. A couple of dozen more were in the water, rhythmically beating their wings against the surface of the river. I'm not sure what that behavior accomplishes; it didn't seem as though they were feeding.

Other pelicans were diving into the water to catch a mid-afternoon meal.

I had no intention of paddling very far, but in the end I moseyed up the river about 5 miles and pulled out for a break across from Willowcreek campground.

I paddled back in time to see the sun set at the mouth of the river and packed up my boat in the last light of day. I was the only person on the river, but had lots of company from birds and harbor seals and even one sea lion.

Here's a map of my paddling route today:

Posted by Dan Gurney at 9:15 PM No comments: Links to this post

When I got up this morning I wanted to take my new hiking boots out for their first real hike. I'd already taken them out for two short walks, one on the walking path in the Laguna Park east of town and the second on an easy hike on the Kortum Trail from Shell Beach to Peaked Hill.

Annadel Park would give me my first real test of how the boots work on trails that can be rocky.

I chose to hike Annadel's Cobblestone Trail up to Rough Go Trail. They make four and a half mile loop with Orchard Trail, just about right for an two hour hike to try out new boots.

At the entrance to Cobblestone Trail the Park Service posted a sign warning hikers that they may encounter a mountain lion on the trail.


Like many others, I don't worry about encountering a lion. I hike alone and I hike very quietly. I suppose there is a small chance that someday I might stumble upon a mountain lion. But I'd say it's unlikely. If anything, the slim chance of seeing a mountain lion adds a little interest to the walk. (Yesterday's paddle out to the mouth of Tomales is similarly enhanced by the knowledge that Great White Sharks swim in those waters.)

I saw this large scat on the trail near the place where Cobblestone Trail meets Rough Go Trail.


I thought that this scat may have been left by a mountain lion. Someone with more experience with large carnivorous mammals might be able to say with more authority what I saw.


Here's a map of the route I hiked today.

Posted by Dan Gurney at 5:03 PM 4 comments: Links to this post

I was among fourteen friends paddling on Tomales Bay this morning. We left Miller Park (a.k.a. Nick's Cove) at about 9:15.


We paddled northwest, up the bay towards Tom's Point where we stopped briefly before crossing to the Point Reyes shore, the better the catch the waning ebbtide current running out the bay.

We paddled until we got just outside the mouth of Tomales Bay where it empties into Bodega Bay. The last beach with an easy protected shoreline is Avila's Beach where we pulled our boats out of the water and took a walk further up Tomales Point.

Having paddled four miles and walked maybe a third of a mile, we decided it was time for lunch (though I think it was still before 11:00) and spread out a sumptuous potluck meal we all enjoyed into the early afternoon hours.

The paddle back was aided by a flooding current that carried us back to Nick's Cove.

Some stayed on to enjoy an IPA at the clubhouse on the end of the pier at Nick's.

The route as mapped by my iPhone:

Posted by Dan Gurney at 9:34 PM No comments: Links to this post

Since getting back from Cycle Oregon 2015, I've been interested in striking a better balance between my outdoor activities which are primarily bicycling, hiking, and kayaking. (Training for Cycle Oregon decidedly tilted my activities towards cycling.)

In fact, I've been on a bike only once since getting back from Oregon about two weeks ago. I've done quite a bit more paddling. The first two days of October I've paddled at the mouth of the Russian River which for the present is closed. The river level is high, about 6.5 ft above sea level at the Jenner launch ramp, which makes for a full river and good views from the boat.

I met an interesting kindred spirit out there, a fellow named Bob Noble, who paddles out there very regularly and keeps a blog about his outings at his blog called Bob's Eyes. He takes good photos of the things he sees.

Bob inspired me to go out there two days in a row, something I don't often do. Here's a photo that I took while out there yesterday. 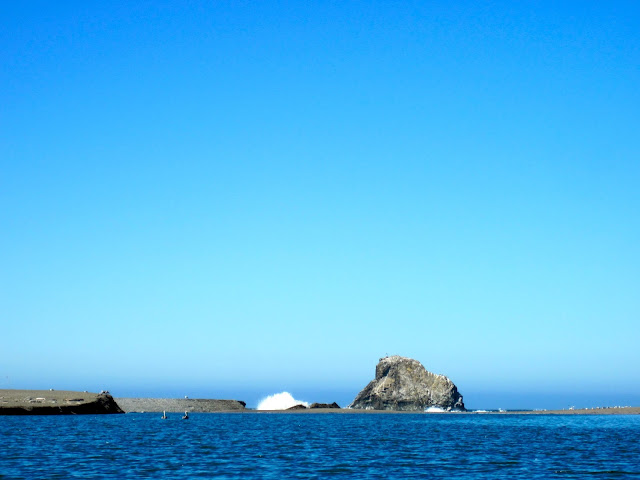 Bob also got me thinking about blogging again. I thought it might be fun to keep a log of the things I'm doing now that I'm retired.

Yesterday my wife and I celebrated our 41st wedding anniversary.

We rode our tandem bicycle 58 miles along the American River (near Sacramento, California) on the well-maintained Jedediah Smith Memorial Bicycle Trail used by 5 million people annually. The weather was warm and sunny. We really enjoyed riding so many miles without ever having to worry about automobile traffic.

When we got home, we showered and went out to our favorite cafe for dinner. Here's a picture of us at dessert.

Dan Gurney
A retired teacher who enjoys being outdoors, especially hiking and paddling along the California coast.